Carly is a professional storyteller with over 10 years of experience, specializing in fantasy, adventure, supernatural, and historical epics.

Her stageplay 'King of Trinidad' placed in the Top 20 out of 1,200 entries at the 2007 Young National Playwrights Competition in New York. She later directed a staged reading of 'King of Trinidad' at the Lonny Chapman Group Repertory Theatre in Burbank, CA.

In addition to her writing, Carly has worked in stage management, and has applied her art skills to character design and storyboarding. She has 4 years of experience in stage combat, has choreographed an ensemble sword battle, and appeared as a featured pirate swordfighter in an independent film short.

She has also directed short films, including a music video for Neil Gaiman's song 'The Problem with Saints', featured on several websites including both Neil Gaiman and Amanda Palmer's blogs (over 10,000 views on Youtube).

In 2014, she directed her a first full-length stageplay 'Mary Shelley: Frankenstein Unbound' at the Newport Performing Arts Center. 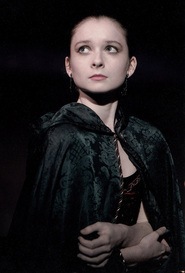 Audrey is a digital illustrator, who has transformed her father's 2D oil paintings into rotating 3D multi-plane digital sculptures.

She has written and illustrated several children's stories, and is currently developing character designs and concept art for animations in both 2D and 3D forms.

Audrey is also a professional, classically trained dancer with 15 years of experience, as well as an agency-represented theatrical actress and an artist proficient in multiple types of media.

Audrey was lead dancer for several ballets: ‘Shiver’, a senior dance project at the University of Hawaii at Hilo; ‘Accoladis’, ‘The Cat and the Witch’ and ‘The Little Match Girl’, as a company dancer for Media City Ballet. She has also performed several solo pieces, including one she choreographed.

As an actress, Audrey has appeared in a university student film, several shorts including a music video for Neil Gaiman’s song ‘The Problem with Saints’, and performed the lead role in the original stageplay 'Mary Shelley: Frankenstein Unbound' in 2014 at the Newport Performing Arts Center.

As a painter and large-scale installation designer, Clay’s artwork can be found in public and private collections around the world.

He designed the glass tile mosaic for the Stocker AstroScience Center (Florida International University), as well as the glass tile floor mosaic at the entrance to the Imiloa Astronomy Center of Hawai’i.

Limited Editions of the original oil painting used for the design, ‘Voyage of the Navigator’, are owned by the estate of U.S. Senator Daniel Inouye, Medtronics founder Dr. Earl Bakken, NASA, and the Japan Ministry of Astrophysics. Writing prodigy Mary runs away with her lover, the radical free-love poet and science enthusiast Percy Shelley, and Mary's naive aspiring-starlet stepsister tags along. They end up at the retreat of Lord Byron, a capricious bad-boy celebrity for whom Claire is a groupie - together, they form a group of intellectuals who call themselves 'The Elect'. When Byron issues a challenge to write a frightening story, Mary weaves their personalities, and her own tragic experiences, into a literary patchwork - but her creation also foreshadows things to come, for the very people who have given her inspiration will become sources of heartbreak...and tragedy.

Mary Shelley: Frankenstein Unbound is an original stageplay written by Carly Bryann Young, based on real-life events from the early 1800's.

A stage reading was performed for the members of the GRT (Group Repertory Theatre) in Burbank, California on St. Patricks' day 2014. The World Premiere was a full production performed on the mainstage Alice Silverman Theatre at the Newport Performing Arts Center in Newport, Oregon under the direction of Carly Bryann Young (August 15-24, 2014). "He doesn't care what size his dominion is, just as long as he's King of it."

An eccentric French nobleman proclaims himself king of a derelict 4-mile wide island, only to have it seized for use as a cable station.

King of Trinidad is an original stageplay by Carly Bryann Young. It is based on the life events of the historical James Harden-Hickey (image on the left depicts a real stamp for James' island kingdom). The initial version of the script placed in the Top 20 of the 2007 Young National Playwrights Competition in New York. "Every faerietale you’ve ever heard… is real."

When the human realm is invaded by monstrous faerietale creatures, two humans who have escaped imprisonment in the Otherworld hunt down their doppelgangers.